We just got back from Ghana where we had another successful visit. Anne conducted 2 Every Child’s Path sessions attended by approximately 75 teachers. We also visited our original 2 schools where we were greeted surprisingly by dancing, plays and music by all the children welcoming us. We reviewed the status of the construction of our Every Child’s Path School in Accra which has now overcome some of the municipal issues and is back on track. Hopefully if we can raise enough funds, it will be ready in 18 months.

And of course, Ponacka Ghana, which was well attended on our first Sunday where we put together an Olympic afternoon with a torch run and a ceremony together with 4 teams composed of kids ranging from 4-15 years. The kids loved it and it was amazing to see that the varying ages of the kids on the teams was not a problem. In fact they embraced it as the older team members helped the little ones who were equally competitive.

When we arrived on the second Sunday, it was very rainy and we did not expect many kids to turn up. Eventually the sun came out and the kids started trickling in and within an hour there were about 50. Kwame, Helena and the volunteers do such a great job in ensuring every Sunday is a positive experience.

Of course, they were thrilled and very grateful for Ponacka’s contribution which I personally delivered in cash as it is so expensive to send money. Thanks again for all your support. 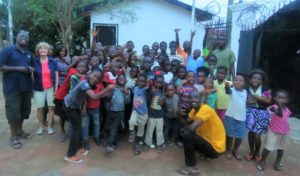 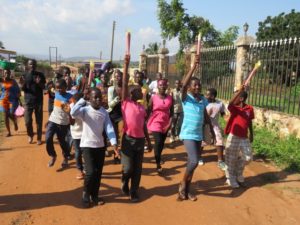 You are about to embark on one of the most important journeys of your life. In just a few moments you’ll arrive at the gates of Camp Ponacka. You must be a little nervous but you’re excited. You probably can’t wait to see what this beautiful, sunny place has to offer. Let me give you a little taste of what to expect.

You will get to experience things that you could have never dreamed off – canoeing, kayaking, archery, horse-back riding, waterskiing – the list goes on and on. You will be able to try, learn, fail and grow. Every step of the way, counselors and an exceptionally caring staff will be there to push you and help you succeed. You’ll develop skills, confidence and grit that will accompany you throughout your life.

You will get to see the best that nature has to offer.  Whether it’s just sitting and watching the sun set, swimming in the cool waters of lake Baptiste or even warding off mosquitos while exploring the depths of Algonquin park – you’ll develop an appreciation and comfort with nature that is unparalleled.

Trust me, there will be routines and songs that you may find odd at first. You’ll be surprised how quickly you will look forward to the comfort of enjoying these rituals summer after summer.

It will be incredible, just you wait. If there’s anything more beautiful than the camp itself, it’s the people. Your cabin mates will become your brothers. Sure you’ll have your disagreements, as all good brothers do, but these guys you’re about to meet will become some of the best friends in your life. You’ll work together on canoe trips, you’ll work as a team during evening programs and above all- you’ll lift each other up and challenge each other to be the best you can be. Don, Anne, Nick, Laura, the staff and counselors will take exceptionally good care of you. They will make you laugh, keep you safe, encourage you and support you. They will help you become an incredible leader, and a compassionate and thoughtful soul.  8-year-old me, you cannot even begin to fathom how incredibly lucky you are to become a part of the Ponacka community.

Above all, you are going to have the most fun you have ever had in your entire life. You may get homesick, but that will be incomparable to the camp-sickness you’ll feel when you have to leave these sunny shores for the summer.

And so my little friend, cherish every last minute you have with these people and in this place. Be thankful for the incredible opportunity you have been given. It will seem like only an instant before you have grown and you must say goodbye, knowing very well that while you may not be back every summer, the Ponacka Spirit will never be far from your heart. I have some advice for you that may sound a little strange – be a zero! I know that this seems like very peculiar advice to give, but bear with me, all will become clear.

Actually, this is not even my advice, but some wisdom that comes from Chris Hadfield, the Canadian astronaut. For those that don’t know him, he is an amazing Canadian, a man who has been the best at everything he does, but is still a humble, “Ned Flanders” kind of guy. He was in the military and wanted to be an astronaut. So figured the best path was to become a fighter pilot. So he did the jet training course, and came top – the only way to guarantee he would fly fighter jets. He wanted to go to the US Top Gun academy, so he became the best fighter pilot in Canada. At the Top Gun academy, where all the best pilots from the US Marine, AirForce, Navy and all over the world train, he graduated as the top pilot. Then he applied to NASA with hundreds of people as amazing as him, and he got in. Even then, most astronauts never actually make it into space, but he did, three times, finally as the commander of the International Space Station. So Chris Hadfield has continually gone into new and very challenging environments and ended up as the best. But he has some advice to help us all cope with new situations.

We all have new situations. Even as a doctor, there are always new courses, new skills or new committees where I go and have to adapt and learn. The campers here are all thrown into new challenges at camp – new tent mates, new skills, new programs. Counsellors have to take on new responsibilities and new tasks. And the CITs especially, have a whole month of everything new in terms of the roles they play as leaders and the extra responsibility – as well as being evaluated 24 hours a day for a month. As part of my job, I have medical students and residents come and train and learn with me. They are all very smart and very keen and very nice. But sometimes one of them will try too hard to be great and it always becomes disruptive and annoying. But I could never quite put my finger on describing what they were doing. Chris Hadfield has done that for me.

So in a new situation, he feels that we can divide people into three categories.

Minus 1 – they are actively harmful, and create problems

Zero – their impact is neutral, they don’t tip the balance to better or worse

Plus 1 – someone who actively adds value to the group

Let me give you an example to help explain this. If we have a group of campers all taking kayaking. The minus 1 is the kid who shows up late, doesn’t listen, interrupts, does the drills wrong. The person trying to be the plus 1 is the kid who has some experience at kayaking and really wants everyone to know it – he says “my instructor in the city said to do it differently,” “my dad said you should hold your paddle like this,” “when i kayaked in the Himalayas we did it better.” We all know kids like these two, but before you start looking around your table trying to figure out who is a plus or minus 1 – look at yourself. At times we all have little bit of a minus 1 or a plus 1 inside us in certain situations. This talk is to encourage self reflection, not judgment. So how does the Zero handle this – he shows up early to ask if he can help set up, he listens to the instructor and tries to do the drills exactly as told, he helps his friends if they ask him, but keeps quiet otherwise, he stays late to clean up and over time he becomes a plus 1.

The same applies to counsellors. A new counsellor at the swim dock shouldn’t come in and try to change how things are done on the first day, you watch, learn, observe and learn how it is done here and why, and then over time that person’s previous experience and knowledge will be helpful, and maybe will help make positive changes.

So whether you are commanding the space station, learning to kayak, or taking on a new job or responsibility, in any new situation do not be a minus 1, do not be a plus 1, aim to be a Zero and you will gradually become a big plus 1. The 70th Season Has Begun!

What perfect weather to start off our 70th season! The July boys can be heard laughing and yelling as they play PHL, PBA, PIFA and sphairee.  No complaints about swimming lessons in the heat and sunshine.  Meatball subs, outdoor BBQ and pizza with chocolate milk… camp can’t get any better!

We welcome blog posts from all our staff, campers, and Ponacka families. Please contact us with your post.